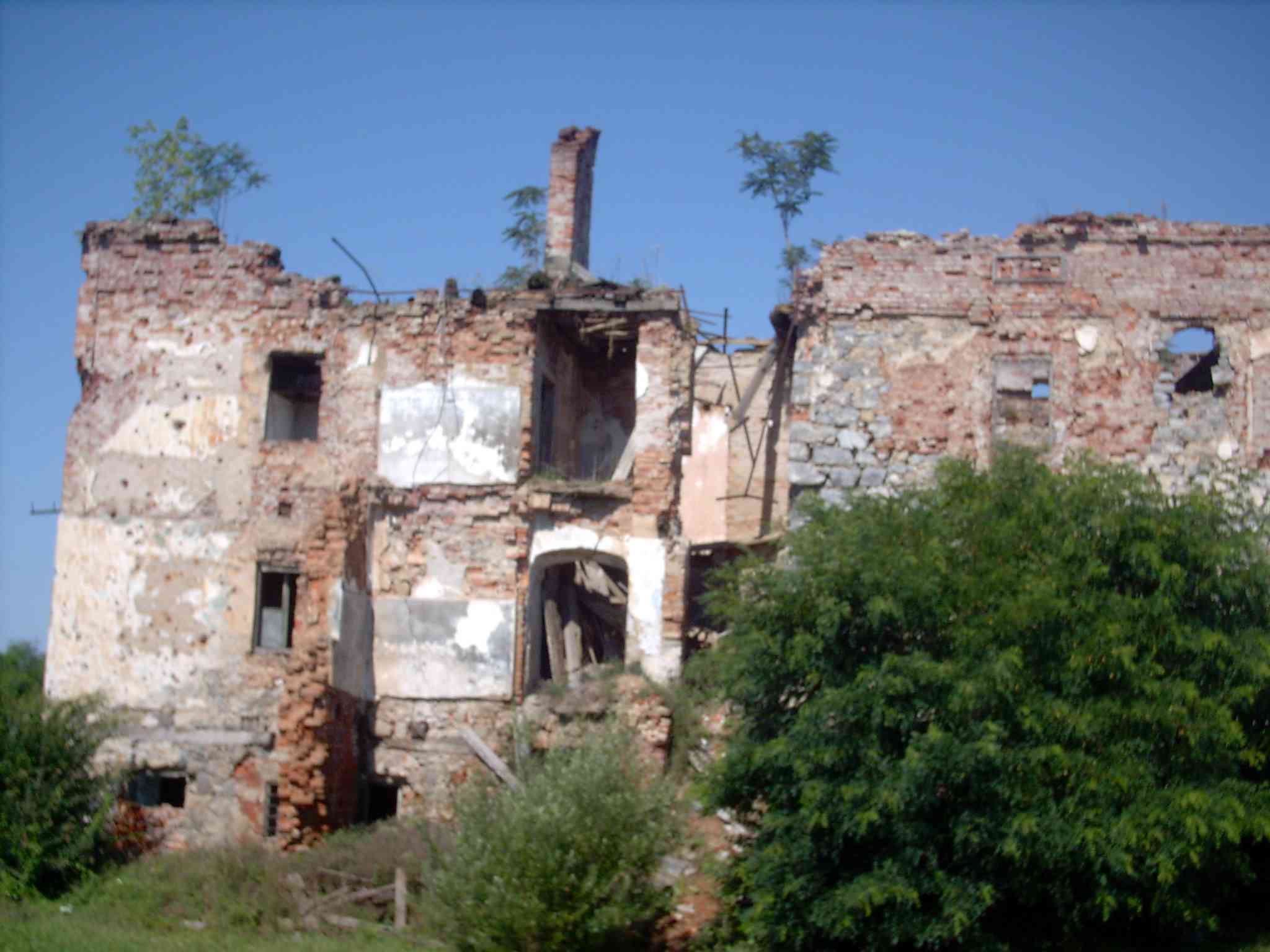 Being shelled, the way I was shelled, was a bit like having high explosive hiccups. There was a long enough pause between each blast to make me wonder if that last one was the last one. But then it wasn't and I was dunked back into flinching, cringing terror. It happened again and again. Over the course of an hour or so I came to understand how this breaks minds: nothing to fight and nowhere to run, even my fear was useless. If I really, honestly, believed in God I would have known it then because I would have been praying, out loud, without shame. Instead all I could think about was luck. Our attackers would have been outrageously lucky to hit us, but luck can be quite outrageous sometimes...

It happened in 1990 during a conflict that was temporarily being called the Yugoslav Civil War but in Croatia is now referred to as the Croatian War of Independence.

I was driving my boss’s Ford Sierra. We weren’t insured for shelling. In fact we weren’t expecting shelling as we arrived in Karlovac after a long, fast night-time drive down a mostly deserted Croatian highway. Mario Baresec, a Croatian with a Serbian surname, was sitting next to me listening to the progress of the war on the radio. He had gone ominously silent as we neared the end of the road but he had assured me he would be keeping us away from the fighting.

We were on our way to visit his family. It was days away from Christmas. We had dropped off a car load of supplies at a refugee camp in Hungary – the legitimate reason for our trip – and then we had taken an unscheduled detour into Croatia to see Mario’s relatives. It was risky, given the fact there was a war on, but Mario said it would be all right. At the time I was a reporter for the Bedford Citizen who had always dreamed of being a war correspondent and a little part of me hoped it wouldn’t be all right. A colleague from the Luton Citizen was in the back seat. A little part of him hoped it wouldn’t be all right too.

At that point I thought the road was finishing up at some kind of mountain range, massive dark shapes were looming up ahead beyond the reach of the headlights. Then I realised they were tower blocks in a city under black-out conditions.  It was an astonishing, unnatural sight – a whole city trying to hide itself – darkness within darkness. There were only two sources of light: our car and a row of toll-booths ahead with their doors were swinging slowly as though they had just been abandoned. I zoomed past, headlights on full beam, a tape of The Doors blaring out of the casette player because Mario had given up on the radio some time ago.  Then came the first explosion.

I don’t know if it’s possible but I remember thinking I felt the force of it push me forwards in my seat. I thought the shell landed within a couple of hundred yards behind us but as Mario yelled at me to put my foot to the floor and switch off the headlights we sped past a burning car at the side of the road that I hadn’t noticed before. There must have been a flash but it was the noise and the force that had imprinted itself on my mind.

I found myself immediately in a state I can only describe as ecstatic terror. The sudden rush of fear incorporated the understanding that whatever that bang was, it wasn’t us and without any restraint at all I mashed my foot into the accelerator pedal. Mario called out directions as I threw the car round corners but there were more explosions, ratcheting up the fear each time. We were all shouting.

I remember stopping and demanding clear instructions: “Speed up, slow down, lights off, lights on – what do you want?”

I don’t know if Mario said I was more likely to kill us than the bombardment but that was clearly what he was thinking. I put the headlights back on.

“We have to find a sentry or someone to guide us out of here,” Mario explained and that at least was something to focus on. We set off again.

Neither I nor my Luton Citizen colleague wholly trusted Mario. He had been making his living importing Yugoslav wine to the UK and from the very start of the project had displayed an irritating fondness for drip feeding us information instead of coming clean straight off.

He had initially been coy about saying precisely which refugees our little convoy of relief supplies was headed for. It turned out that Bedfordshire’s community of Yugoslav ex-pats was largely Serbian. Our mission was intended to support Croatians who had fled across the border into Hungary. Mario was afraid that if our preliminary stories revealed this Bedfordshire’s Yugoslavs would not donate goods for the trip.

At that stage he was probably wrong. Bedfordshire’s Yugoslavs had tended to show a weary disappointment talking about the conflict whenever I spoke to them before the trip. The stories of atrocities that eventually came out were what really polarised people. Understandably Serbians in Britain found it hard to believe the war crimes that were being committed in their name by Chetnik paramilitaries.

The Chetniks were part of a proud history of guerilla fighting against the Nazis during The Second World War. For the British Serbians it was like being asked to believe Robin Hood had taken up ethnic cleansing. And they would add that it was the Croatian police who had supported Hitler’s attempts to exterminate the Jews.

By this stage of our trip, however, we had heard the refugees in Hungary talking about the activities of the Chetniks moving through the Croatian countryside. They had been reluctant to tell us, knowing how the stories would escalate the bitterness of the conflict but then had confessed the horrific rumours circulating amongst them about the fate of their friends and relatives: eyes gouged out with spoons, people killed with chainsaws, summary executions.

Mario had brought us into this, promising we would avoid the fighting – a promise which he had been unable to fulfill – but now we had no other option than to let him get us out of it. I drove on in a strange city, lights only on when absolutely necessary and still the explosions came. We reached a square and at last found a portly soldier in an ill-fitting uniform, weapon slung over his shoulder, standing by a small Japanese truck. Mario wanted us to stay in the car while he did the talking but we couldn’t just sit there waiting for a something to land on us.

The soldier’s breath stank of schnapps and he had a big friendly dog that crept up to me, tail wagging furiously. Each time a shell landed the dog cowered submissively for a second then anxiously continued his greeting. If he can take it, I can take it, I thought although I wasn’t convinced.

Using my National Union of Journalists ID card Mario persuaded the soldier to show us a route out of the city that had not been closed off by the Serbian army. We were soon hurtling through backstreets following the soldier in his battered Japanese truck which now had the dog in the back. Finally the shelling was becoming distant and eventually the soldier pulled over and waved us on our way.

We felt safer but I couldn’t slow down, in fact I didn’t slow down until we were waved to a halt by a Croatian policeman at a checkpoint. Now that the war had caught up with us I was expecting gangs of Chetniks to step out of the shadows at every corner. After the shelling anything seemed possible.

We spent the next few days on a mini war tour of Croatia. We saw the stables where the famous Austrian white stallions were bred. At the stables we saw a CNN reporter filming a piece to camera kitted out in pristine camouflage gear while his off-camera team busied themselves around him in jeans and sweatshirts. The Daily Mail had said the stallions were being eaten by starving townsfolk which had infuriated the stables. They had only lost one animal so far, hit by shrapnel.

We visited Mario’s cousin on one of many front-lines. We traded chocolate and Deutchmarks for fuel, watched someone dismantle a grenade on a table in front of us in a bar and drove past a live mine on the road without realising what it was until afterwards.

I didn’t feel safe until I was in Italy. The fear that was ignited so dramatically by the bombardment in Karlovac remained simmering in the background, even during the hours we spent on the shore of the placid Adriatic Sea. The people who live through wars, whether soldiers or civilians, are doing an extraordinary thing by coping with it for so long.

It gave me a taste of the life of a war correspondent. If I had chosen that path, that constant anxiety would no longer be simply fear, it would be my personal touchstone for knowing whether I was doing my job properly or not. If I hadn’t been scared shitless by an assignment had I really been to the places where the stories were? Could I survive a life on edge like that?

A week of it exhausted me so much I fell asleep at the wheel on the way home. My foot slipped off the accelerator and we rolled safely to a halt by the side of the road – it was probably the most immediate danger we were in throughout the whole trip. Without doubt we were outrageously lucky to have got off so lightly.