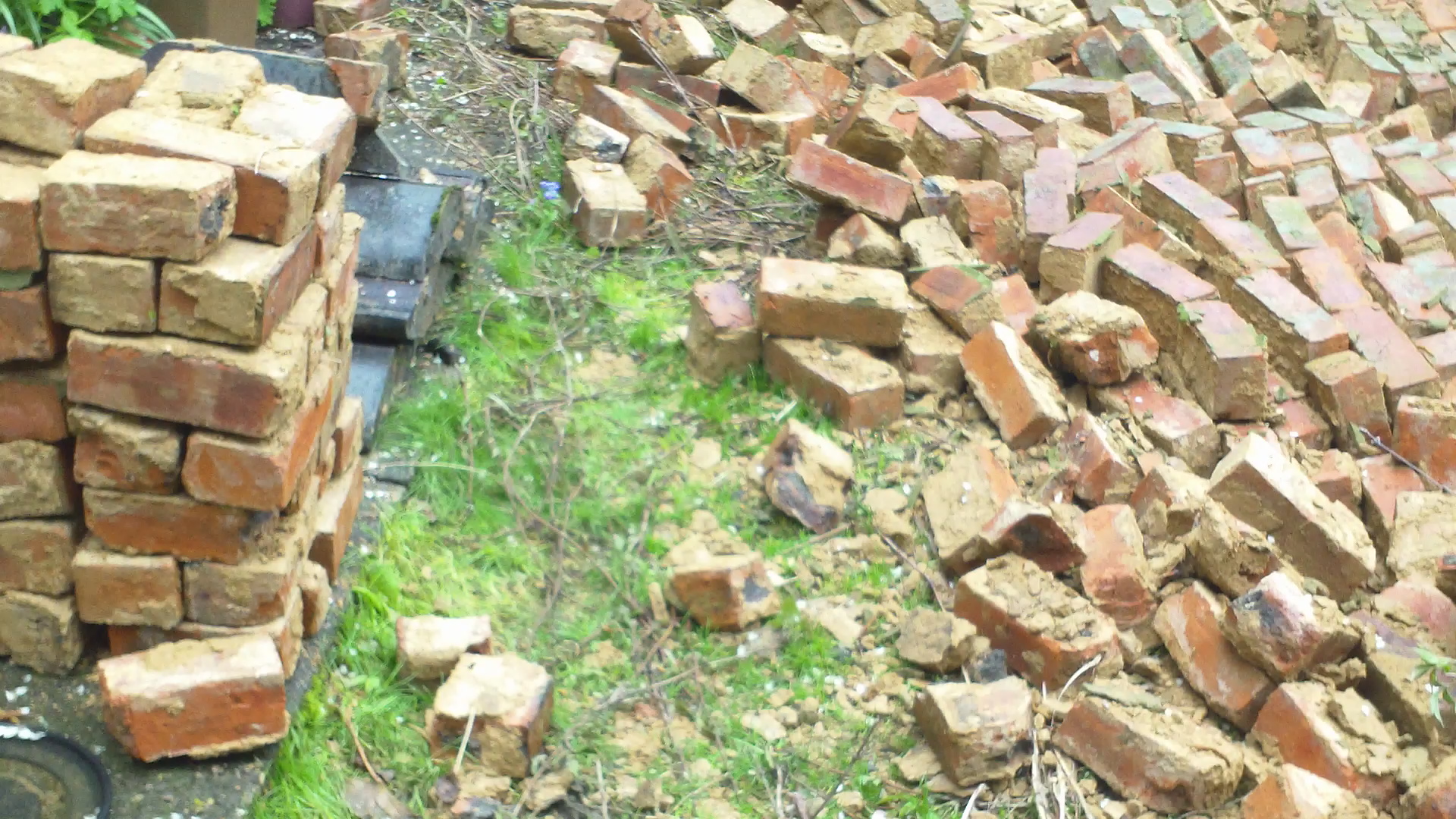 Bricks in need of cleaning and stacking

There’s something I ought to think about but I know from every single piece of dull drudgery I have ever been involved in that it is better if I don’t think about it. This might sound a little bit like avoidance, especially to spouses. Spouses, I have noticed, don’t seem to like that kind of talk but if I think about it, it won’t get done. It will get delayed, over-planned, reconsidered, mulled over, rationalised away and finally forgotten. That’s the danger of thinking about something. It leads to not thinking about it. If you start out not thinking about it, as I have, things can only get better.

I’m talking about the wall which a few weeks ago failed miserably in its one role in life: that is being an upright barrier between two distinct sections of the space-time continuum, namely our garden and the garden belonging to our neighbours, the New Jesus Army.

The day after it fell down we went to each other’s front doors to talk about it when it would have been easier to stroll through the gap.

And since then, although there have been big sessions of ground clearing going on with all border controls suspended, we don’t just leap through to have conversations with each other. It’s not that we are unwelcome to do so but we respect the invisible boundary between our little worlds.

In short, the Emperor’s New Wall is behaving as though it never needed to be there in the first place.

This is a radical and dangerous idea with a whiff of the notoriously open-plan 1970s about it: a decade so empty of practical achievement that not-building walls became an architectural style.

In the short term it is a particularly dangerous idea because the job of cleaning and stacking the bricks is so mind and back numbing.

Ah. There, I did it. I thought about the thing I was trying not to think about: several hundred bricks waiting to have the useless mortar chipped off them and then to be stacked ready for re-use.

There is nothing more tedious. Each brick is its own little battle. With some the mortar falls away like sand and you have to be careful not to break the brick. On others a much more cementy coating is clinging on for dear life and you can spend ten minutes knocking off chunks only to have the brick crumble once you’ve finished.

Any of my sons not smart enough to have something better to do has been press-ganged into the effort.

They have all been out there at some time although the more of them there are at once the greater the risk of a spontaneous fight breaking out over who has the best tool. Men eh? After a few minutes I lost Billy and found his empty boots by the kitcher door.

“He’s having a rest,” My One True Love informed me.

Bonnie, at the age of four, just wants to be where the action is and showed the most enthusiasm for the task. Her contribution would have been greater if she hadn’t needed to change her entire outfit so often, but what could I do? She insisted it was necessary.

In fact Bonnie has acclimatised very well to the wall being down and has already been next door for one of their locally famous barbecues.

Way past her bedtime she finally had to be carried away from the gathering in full tantrum mode which I hope the neighbours took as a backhanded compliment to their hospitality.

It was also, of course, a reminder to all of us about the occasional amenity value of real wall and just as in the story of the Emperor’s New Clothes it took a child to demonstrate the lesson.

This column first appeared in the Northampton Chronicle & Echo