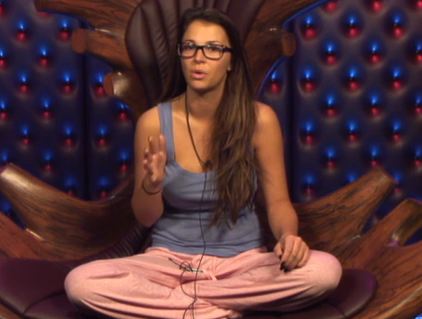 A COUPLE of months ago mentioning the name of Natasha Giggs would have been breaking a High Court injunction. This week we've seen her on national television popping out of her top during a friendly frolic with a fellow contestant on Big Brother (Kirk from TOWIE as it happens). She faced a public eviction vote on Friday and despite generally being accepted as a nice person by one and all that thing of having had a long term affair with her brother-in-law Ryan Giggs was just too much baggage.

During her time in the house she got a pretty thorough grilling on all the gory details of her affair.
She talked of the love she still felt for Ryan’s brother, and the love he still felt for her but said she was not prepared to sign up for a life of arguing about the same thing every day.
You can see what she means.

Aside from the Ryan thing she’s a pretty full on flirt. Her ex Rhodri would have plenty on his plate even without his brother arriving in the box late for a tap in.
Having said that, these are crazy times.
During the past few months Natasha has been one of the worst kept secrets in the country.
There’s plenty of people who have made the same mistakes as her with less to tempt them.
Michael Madsen scouldn’teemed fascinated by the fact she wasn’t a three-headed monster but was also vaguely horrified that what she had done had got her into the house as a ‘celebrity’.
To be fair you couldn’t deny that seeing what she was like, as ordinary as that was, satisfied a certain curiosity.
Natasha said she wanted to show people the real person behind the headlines and saw Big Brother as a chance to do that.
She’s expecting to go back to housework and the school run now that’s she’s out and there’s nothing about her that makes you doubt it.
Perhaps Big Brother was the one place she could take a holiday from herself for a while.
She got just over a week. Natasha got more than a lot of people got, but she hasn’t got away with it.

1 Comment on Natasha Giggs hasn’t got away with it